#FreeBritney – why has Britney Spears’ father taken control of her finances? 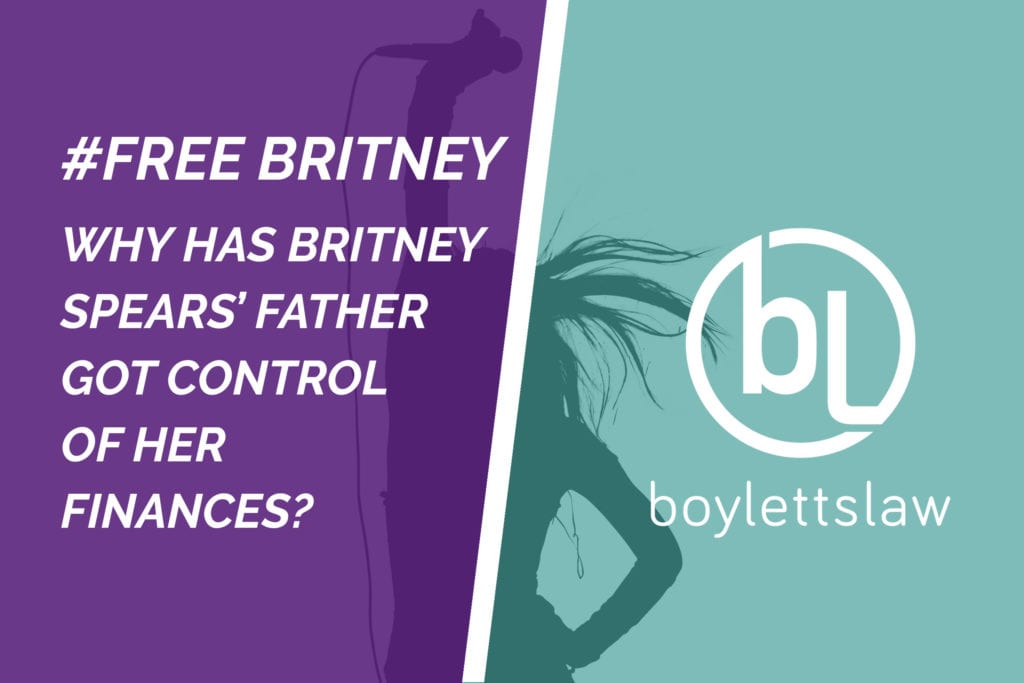 On Tuesday 16th February, the documentary ‘Framing Britney Spears’ was aired in the UK. The documentary has sparked much debate about why Britney Spears’ father has control over her finances and there is currently a #FreeBritney movement started by members of the public who are concerned for Britney’s welfare and are questioning why she has no control over her own spending and financial affairs.

What is going on between Britney and her father?

In the USA, a Conservatorship is a process whereby a person who is mentally incapacitated has their finances managed by a person appointed by the Court, known as a Conservator.

This type of order is most commonly used for people suffering with dementia.

What is a Deputyship Order?

In the UK, a Deputyship Order is most commonly used when someone no longer has capacity and is unable to deal with their own affairs.

A person can only apply to become someone’s Deputy if the person to whom the application relates lacks mental capacity. This means that they cannot decide for themselves at the time that a decision needs to be made. The lack of capacity will need to be proved by an assessment of capacity by a qualified medical professional.

An order for a Deputyship Order is usually made when someone lacks mental capacity and does not have a Lasting Power of Attorney in place. As a Deputy, you will be authorised by the Court of Protection to make decisions on behalf of the person who no longer has capacity. As with a Lasting Power of Attorney, there are two types of Deputyship Order:

This is the most common form of Deputyship and deals with the person’s financial affairs. This includes managing bank accounts, investments, administering pensions and selling property.

A Personal Welfare Deputy is for when a person lacks the capacity to make decisions regarding their care and treatment. The Deputy will make decisions about medical treatment and how someone is looked after.

Why does Britney Spears’ father have control of her finances?

So why has Britney Spears father got so much control over his daughter, when she is able to continue working, perform songs and go on tour? We know that Britney is a huge pop star and has had a very successful career. She suffered a mental breakdown in 2008 and did have a short spell in hospital. It was during this period in which her father, together with his legal team, successfully obtained the Conservatorship.

This may have something to do with the value of funds within Britney Spear’s Estate. In the UK, the value of funds will be something the Court will take into consideration. Although a person may be able to manage their own day to day spending themselves, it is possible they would need a Deputy to manage much larger sums. This could be the reason why the Court had deemed the Conservatorship necessary as Britney does indeed have a high amount of wealth.

Capacity is a complex issue and something which should be left to medical professionals to decide. In some instances, it is possible to determine a lack of capacity due to someone suffering with a severe form of dementia or brain injury. However, in other cases the lack of capacity may be more complex, such as being vulnerable to duress or undue influence, manipulation or vulnerable to financial exploitation. This could lead to the person lending or giving away large sums of money and being taken advantage of. There are also additional disabilities which may be more difficult to see without delving deeper into someone’s personal affairs such as gambling, drug addiction or alcohol.

It is not possible to see the evidence on capacity which has been declared in Britney’s case as this has all been kept confidential. We do know, however, that Britney has stated that she does have sufficient capacity and that she has applied to the Court to terminate the arrangement.

To date, the Court has decided that the Conservatorship should remain in place.

The importance of a lasting power of attorney

The documentary highlighted the complexities when trying to strike a balance between protecting vulnerable people from exploitation and ensuring that there are sufficient safeguards in place but also ensuring that they have sufficient freedom and as much autonomy as possible. It is interesting to see the differences in the law both here and the US and they highlight the importance of us all making sufficient provision for people we know and trust that will act in our best interests by way of a Lasting Power of Attorney and doing this at a time when we are in good health and less vulnerable.

It is not possible for us to make a judgement on whether or not the Conservatorship is required as the paperwork in this case has not been released.

If you would have any questions regarding Lasting Powers of Attorney and Deputyship Orders please contact us on 01279 295047 or complete our enquiry form.

or by completing our online enquiry form.

Any cookies that may not be particularly necessary for the website to function and is used specifically to collect user personal data via analytics, ads, other embedded contents are termed as non-necessary cookies. It is mandatory to procure user consent prior to running these cookies on your website.